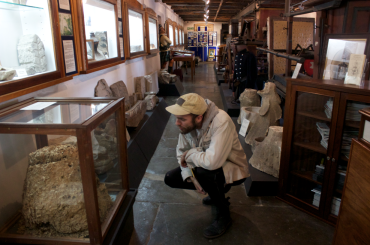 Matthew Benington is a graduate of BA Fine Art, Falmouth University and the Royal College of Art. He is currently developing a commission for Penryn Museum as part of New Expressions 3, New Opportunities Award, curated by Field Notes. We spoke to Matt following his recent research trip to the Museum and told us a little bit about his work and his plans for the commission:

FN: Tell us a little bit about your practice, are there particular themes or ideas which run through your work? Do you often work in response to an existing object or site?

MB: My most recent work is Open Castle, a body of site specific work involving the unusual Georgian architectural phenomenon of ‘fake ruins’ or folly’s. My installations focus on the folly archway, where the monument opens out to the flux of the landscape. Photographing these landscapes allows me to generate large scale xerox prints that I intuitively hand colour with gouache, emulsion and polyurethane. The resulting imagery is installed outside at the folly arch, through ropes attached to the monument.The paper image assumes sculptural properties when wind forces it to strain towards the landscape it conceals/represents, or inflates and contorts into a new form. Another image installed that day was a 500 x 300 charcoal drawing of a hand. When I found out one of the Hardin brother’s who built the folly had lost a hand I related it to a time when an accident nearly cost me two fingers, the wires through the centre and ring finger ensured my hand was fixed in the sign of the horns for over a month, it looked ridiculous!

FN: What was it about working in response to Penryn Museum’s collection that made you interested to take on the project?

MB: I enjoy working in response to a specific context, especially ones where individuals like Shirley, are curating and overseeing almost every aspect of the museum. It’s a great example of determination to share and organise artefacts which otherwise might not have that kind of contextualisation.

FN: You recently spent a few days exploring the collection and talking to the volunteers at the Museum. Was there anything that particularly caught your attention?

MB: I enjoyed many aspects of the museums collection, a few examples would be the trench art such as engravings carved into shell casings, I love those because they subvert the function of a military object and utilise it as raw material for expression. They remind me of whaling when on idle days scrimshaw was made, time given to scrollwork, engravings, and carvings done in bone or ivory.

FN: Can you tell us a bit about how you intend to approach the process of making new work in response to the Museum’s collection?

MB: I am keeping open to my intuition, but I do envision a printmaking response. At the moment I am weighing up whether or not to represent by hand an image from the collection or to create something for the museum that is more of an artefact, with the capacity for museum visitors to reflect on their own experiences. That sounds vague, but the portal has always been there in my work. The portal has always been there in my work, for me at the age of 26, it signifies the approach of an alternative reality where I am free from the pain of osteophytosis (severe premature arthritis) and chronic face pain and numbness from eye socket fractures sustained in a brutal physical assault on my person in 2012.

FN: Have you got any other interesting projects coming up this year?

Everything’s on a knife edge, that’s the way it goes. Major surgery next month on my foot. I have a large curation project with 13 UK, German, Norwegian, and Irish artists. I have so much respect for all of them, and believe in the synthesis of their work, that should be going down in Wuppertal in Northern Germany. Ideally it will exist in a UK venue too.